Have a wonderful weekend!

What is Spadefoot Toad you ask?  Aside from being a round amphibian creature with short legs and protruding eyes…it’s one of my favourite red wine!

If you’re a wine lover you must check out these three recently released spectacular, highly anticipated new labels from the coveted Spadefoot Series at Summerhill Pyramid Winery.

Keeping it in the family; Ezra Cipes (second generation) is extremely proud to present these wines, made in partnership with grape grower Ron Firman at his idyllic Spadefoot Toad Vineyard in Oliver, BC, along with the legendary Canadian artist and activist Robert Bateman, who has drafted an original illustration specially for the labels. Ten percent of the proceeds from each bottle sold supports the Bateman Foundation’s work to nurture the next generation of conservationists.

Spadefoot wines are made entirely from organic grapes grown lovingly at Ron Firman’s Spadefoot Toad Vineyard in Oliver, BC. Ron tends his small acreage as if it were a garden, carefully applying compost to each individual vine and creating habitat for the at-risk Great Basin Spadefoot Toads to breed for natural pest control.

Ron grows pristine grapes that give concentrated, age-worthy wines that truly reflect the care he takes in his vineyard. Each single-vineyard bottling is a special expression of the south facing slope on which his vines are cultivated.

If you are searching for the perfect wines to enjoy over cool autumn evenings or to stow away in your cellar for future sipping, look no further! These three distinct bottlings are exploding with flavour and intensity that will only deepen with time.

2017 Spadefoot Toad Sangiovese
2017 was a true vin de garde vintage here in the Okanagan. This unique take on a classic Tuscan variety is seductive and velvety, with a juicy core of candied cherry and fresh blueberry notes and whispers of tomato leaf, vanilla cola and baking spices. Exceptional fruit concentration balanced with vibrant freshness!

2018 Spadefoot Toad Sangiovese
Succulent and finessed. A clean, classic vintage with a long and steady growing season resulted in this elegant, medium-bodied Sangiovese. Red and blue fruits dominate the nose, carry through the palate, and are deepened by heady notes of clove and potting soil. Intense and full of soul… perfect for the changing seasons.uan etched, branded wine decanter to show off these wines at their very best.

To date this has been one of my favourites

How convenient and nice of  the Vancouver International Film Festival to let us stream most of the 2021 movies, documentaries, short films + animations from the comfort of home.  But what was really wonderful after such a long hiatus, was to be able to view these amazing films in person “in-cinema.”  Seems like a long time.

VIFF could not have been more excited to roll out the red carpet this year with Special Presentations that were a cause for celebration. The scope of work that was showcased was simply phenomenal, featuring auteurs like Terence Davies and Kenneth Branagh; stars such as Tilda Swinton and Benedict Cumberbatch; and a spectrum of stories ranging from intimate human dramas to towering historic narratives.

Special Presentations included one world premiere, one Canadian premiere, and the latest addition to the VIFF lineup: The Power of the Dog by Jane Campion, which focuses on the charismatic rancher Phil Burbank who inspires fear and awe in those around him until his brother brings home a new wife and her son, tormenting them until he finds himself exposed to the possibility of love; starring Benedict Cumberbatch, Kirsten Dunst, Jesse Plemons and Kodi Smit-McPhee. Additional highlights included the world premiere of The Sanctity of Space by Renan Ozturk and Freddie Wilkinson, which follows the directors as they traverse Denali National Park and uncover the story of pioneering photographer and cartographer Bradford Washburn; the Canadian premiere of Red Rocket by Sean Baker (The Florida Project), a luminous, seriocomic fable about America’s underclass through the eyes of a washed-up porn star in Texas; and Memoria by Apichatpong Weerasethakul, the director’s first film in English starring Tilda Swinton as an expat orchid grower in Colombia with a strange malady.

The film charts the story of a 12-year-old Syrian refugee who is given a book of poetry of classic 13th-century Persian poet, Rumi. As the perils of her journey mount, the book becomes a magical gateway.  It was amazingly well executed.

I followed that with Disney blockbuster “Cruella” featuring the two “Emma’s” – Stone and Thompson – both outstanding if you haven’t already seen it.   Reminded me of “The Devil Wears Prada.” This was not part of the VIFF lineup; but it made me ponder the notion of having watched an excellent animation that was based on a real person with historical fact followed by a movie acted out by real people that was based on animated fiction.

We hope you join us next year.  In the meantime you might be able to catch “best of the fest” at https://viff.org/Online/default.asp

There are plenty of good reasons to go wine tasting in the Okanagan in October.  For starters:

The wine is always good no matter what month you decide to visit, but come October and over the Fall/Winter in general it’s much easier to book accommodation as the wineries are less busy with everyone back to work and back to school.  So may I suggest a not so little gem of a place to stay…Summerhill Pyramid Winery Guest House (shown in photos on this page).  Not only is it amazingly spacious with a view to die for, but the winery + bistro is adjacent to the guest house.  A hop, skip and a roll home away.

That’s what I’m talking about! 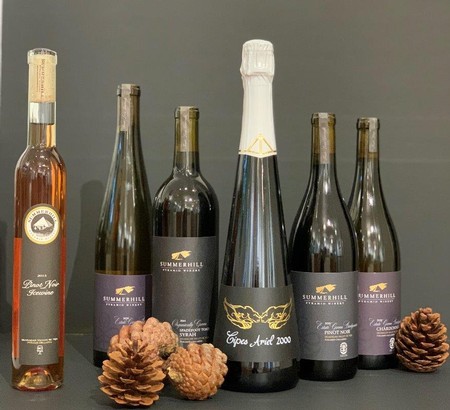 Inclusive and approachable evenings centered around a love of wine.

Vin Van is a pop-up wine company run by two friends, neighbours and wine obsessives: Jo & Steph.
Hailing from different sides of the Atlantic, they were on the same page when it came to what was missing from the food and drink culture in Vancouver, and decided to try something of their own.

“We run a weekly wine bar on Wednesday’s at Dock Lunch, a wine focused supper club series in unexpected locations throughout the city, as well as bespoke private and corporate events.

These events are about sharing our combined mix of influences of good wine and food in unpretentious, approachable environments.

Here’s hoping your month gets off to a good start.

On this first day of October I’m attending my very first Zoom wedding, and hopefully my last. Well I’m not really attending – rather watching from my computer.  Yup, you read that right!  And to be fair; it is a very tiny gathering. still no excuse!  One of my best friends is re-marrying her ex-husband. Throughout their divorce of many years and other relationships, they’ve remained each others’ best friend – which only proves that friendship and respect are key ingredients for a successful partnership. The good thing is I don’t have to dress up although I might put on some makeup. I think all eyes will be on the couple exchanging vows…but just in case.  Can you believe I actually said “the good thing is that I don’t have to dress up?”

VIFF celebrates its 40th edition from October 1-11, 2021 with a kaleidoscopic collection of Canadian work, East Asian cinema, powerful documentaries, narrative cinema from some of the world’s leading lights, elevated genre fare, and much more.  Big screen or small, VIFF is excited to share the 2021 program with film fans in Vancouver and across the country. Explore the full program at viff.org and on VIFF Connect starting today.

I also want to introduce my exclusive local gift packages.

Something new although I’ve been thinking about doing this for a long time and always enjoyed putting gift baskets together for special occasions. Two options filled with small lot, carefully chosen wine/cheese/chocolate delights. A few of my favourite things packaged up to please for all kinds of celebrations.  Many of you don’t reside here in Vancouver, let alone Canada, but maybe you know someone who lives here and is looking to gift something unique.  Certain companies have gifted their clients and also special customers of some organizations have purchased these but hey; they also make a perfect wedding, anniversary or holiday present.  Have a peek and let me know what you think…

Available on my Shop page:

Have an excellent weekend!