Back at the Factory…or in this case the cultural center…

A group of us attended an art/film/book signing event for Mary Woronov; former muse to Andy Warhol.  A muse by definition is a person or personified force who is the source of inspiration for a creative artist. However, Woronov has since become her own creative artist as actor, figurative painter and author.  But getting back to Andy…

I’ve always had a fascination with Andy Warhol, going so far as once trying to locate him (at a relatively young age) at his studio in Manhattan that everyone referred to as “the Factory.”  Unfortunately he wasn’t there and I’m not even sure what would have happened had I found him.  Perhaps he’d have hired me as an assistant, perhaps he would have put me in one of his underground movies and I would’ve become his muse or maybe he would have just told me to scram…but I didn’t see it that way.

Being a bit of a mystery, his work appealed to me and he was way ahead of his time having eventually predicted what is now happening with social media where an average person can become famous through avenues like YouTube or tik tok.  It’s fascinating actually; the world is wide open and yet; it’s not really “real.”  Reality TV, influencers and Art is everywhere.  I remember Warhol’s “Interview Magazine”, nicknamed “The Crystal Ball of Pop”, featuring interviews with celebrities, artists, musicians, and creative thinkers. In 2018, the publication ‘folded’ and ended both its print and web publications.  Times have changed.  But sometimes it’s important to hear significant stories from the past.

Which brings me to my recent meeting with former Warhol muse and cult star Mary Woronov.  It was at the closing reception of her art series “the mystery of the red shoe” and a movie she starred in called “Rock ‘n Roll High School,” at the Palm Springs Cultural Center last Saturday night – the closing night of a MARY WORONOV MEGASPECTIVE presented by The Ebersole Hughes Company – the same documentarian duo who did “House of Cardin,” “My Name is Lopez,” “Mansfield 66/67,” “Dear Mom, Love Cher,” and others.  I’m a huge fan of their work. 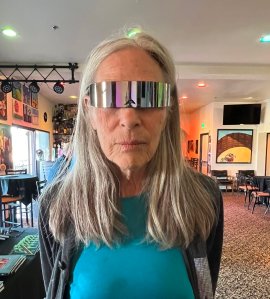 Sponsored by HELLTOWN Whiskey & The Cheetah Hotel (links below). 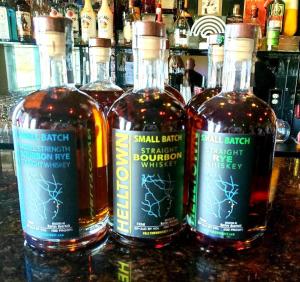 Gathered around was an eclectic bunch, to say the least:  An “in-the-know” crowd of documentarians, entertainers, musicians, whiskey makers and the odd blogger who remains curious.

It’s clear that not everyone knows who Mary Woronov is.  A major cult figure as an actress for her work with Andy Warhol and Roger Corman films, she is also an accomplished painter and writer, having published three books —Wake for the Angels: Paintings and Stories, her autobiography Swimming Underground: My Years in the Warhol Factory, and the novel Snake.

Woronov joined Warhol’s entourage after a class trip to the Factory and starred in a number of his underground films (Chelsea Girls for one), and she appeared as a go-go dancer in the Velvet Underground’s Exploding Plastic Inevitable shows. She left the Factory in the late 1960s and, after recovering from a heavy methamphetamine addiction, spent two years in Europe with a friend. It was during this time, Warhol was shot by Valerie Solanas, and thanks to the now altered Factory dynamic, “there was nothing to go back to.” She then supported herself with work in off-Broadway theatre, got married to director/producer Theodore Gershuny, appearing in three of his films.

Woronov is most famous for her role as Mary Bland in Paul Bartel’s black comedy Eating Raoul (1982).

She’s also funny as hell.  It was a pleasure being in her company.

Speaking of hell….there was Helltown Whiskey where co-founder Roy Rogers Oldenkamp (an L.A. Art Dealer) gave my friend Ramona and me a little education on the making of whiskey as we sampled whiskey sours which turned out to be pretty darn tasty.  The evening ended with us getting a lift to another bar called Truss & Twine with an entertainer who plays piano and sings Dean Martin tunes while his wife sings Dinah Shore oldies. The show is appropriately called “Dino and Dinah.”