In the mood to read a warped Hollywood memoir? 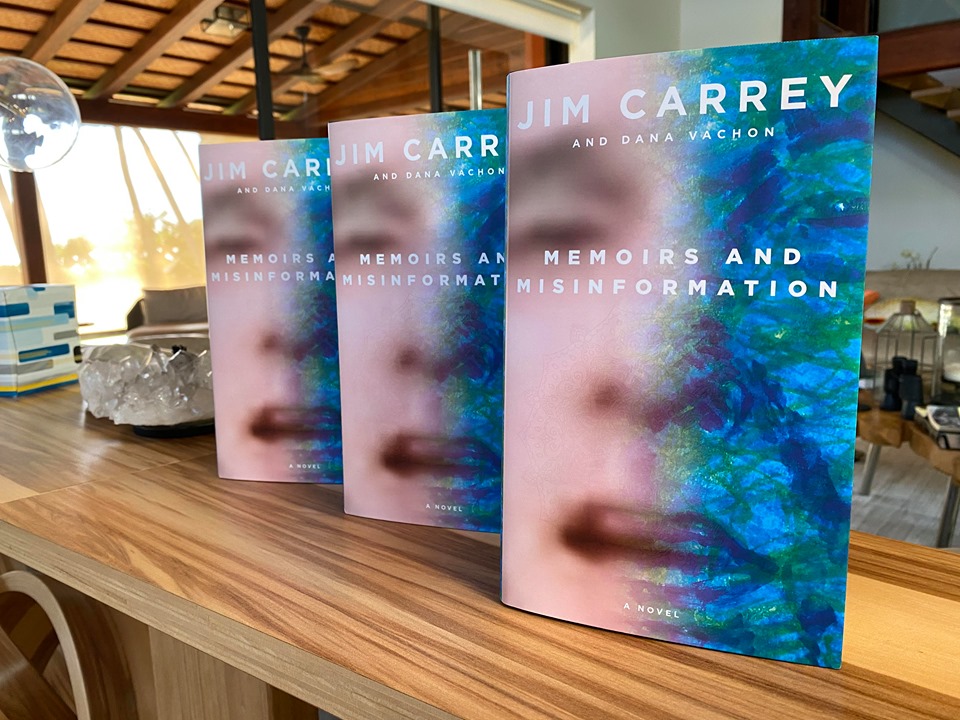 A fiction loosely based on fact…Or;

It could be fact loosely fabricated in fiction. We may never fully grasp where reality starts and the falsehoods end.  And that is the intent.  For obvious reasons.

It might make more sense when you realize the semi-autobiographical book was co-written by one of Hollywood’s funniest, most interesting, diverse and complicated characters.  A person smarter and much more spiritual than you’d care to imagine, and one proficient painter to boot – Jim Carrey who never fails to surprise and astonish with his accomplishments.  Now a book: Memoirs and Misinformation.

Jim co-wrote the book with “Mergers and Acquisitions” author Dana Vachon. The actor previewed the book in a new interview with The New York Times ahead of its July publication, revealing that the writers spent the last eight years working on the project

The book is presented as a mad fever dream starring Jim Carrey, incorporating morsels of autobiography with adventures involving Nicolas Cage, Kelsey Grammer, Taylor Swift, Anthony Hopkins, Goldie Hawn, Sean Penn, and many more.  The names are changed and he has apparently forewarned all actors as to whom they may be referred to as in his book… fully aware that a few of them may not be so pleased.

I was fortunate to be in Jim’s company on at least four occasions.  An intimate dinner for five, a small Malibu wedding where he was best man & master of ceremony, and two parties.  I found him to be quite affable, naturally funny, intelligent and surprisingly down to earth in a slightly guarded way. I felt comfortable in his presence; after all, he is a fellow Canadian. Even though I admire everything he does, I made sure not to invade his privacy as I was there as a guest.  Friend of a mutual friend. I also got the distinct impression he was looking for a higher purpose.  And a sense of I belong here… how did I get here?

Through sheer talent and dedication he realized all of his dreams and then some. Very few of us ever achieve that in our lifetime.  Now the search for meaning in Hollywood years after acting success must have been the aspiration for this book.

If you really like Jim Carrey, stick out the insanity for the pearls of comic fantasy and the nuggets of memoir gold.

“They say his empire was ruined by the same psychosis that found him, at the end, driving around Tucson with a loaded Uzi on his lap, ranting in word salad, high on methamphetamine.” This remark is made about a fictional celebrity guru named Natchez Gushue, but when you encounter it in Chapter 2 you may wonder if it also applies to the creators of this book.

Carrey and collaborator Vachon pull out all the stops as their protagonist Jim Carrey careens from midlife blues through love and career complications toward the apocalypse. (The actual apocalypse, in which the world ends.) “He was nearing fifty, his fans aging, too. His talent was such that Hollywood could not replace him in its usual way, the kind of body snatching that saw Emma Stone swapped in for Lindsay Lohan, Leonardo DiCaprio taking over for River Phoenix.” The question is, should he stage his comeback with “Disney’s Untitled Play-Doh Fun Factory Project” or with a star turn as Mao Zedong in a biopic by Charlie Kaufman?

Mixing the memoir with the misinformation, as the title suggests, is not the clearest or most powerful way Carrey might have presented the story of his life. Did his parents really tell everyone to feel free to beat him, “joking but not really”? Was an affair with Linda Ronstadt in 1982 “the only truly selfless love he’d ever known”? Is the scene where Carrey remembers telling Rodney Dangerfield a joke on the older comic’s deathbed (“Don’t worry Rodney, I’m gonna let everyone know you’re really gay. That kind of thing isn’t frowned on anymore”) real?

Moments of candor and alarming or moving revelations are a bit lost in the mad rush from Hungry Hungry Hippos in Digital 3D to the end of the world, when “Cher and Dolly Parton whizzed by overhead, both singing Leonard Cohen’s ‘Hallelujah.’ “

Makes one wonder if we ever really fully get anyone’s story?

An audiobook version of the novel will feature the voice of Carrey’s “Dumb and Dumber” co-star Jeff Daniels.  Online Publish Date: June 17, 2020

20 NEW BOOKS to read in July to keep your spirits up: