Opera unites music, poetry, drama, and spectacle in the most elaborate of all art forms. 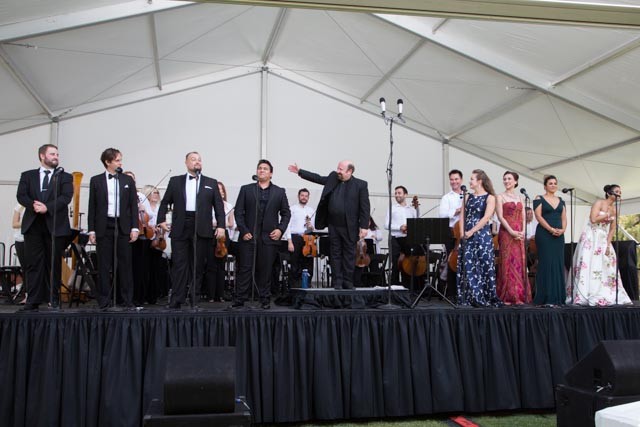 So it was an absolute pleasure to finally attend “Opera in the Park“, the Palm Springs premier cultural event in April .  This is the first time I’ve stayed here this long.  Usually I’m gone by the end of March because it gets too hot here, but this time I decided to stay a little longer. The event takes place at Sunrise Park which is a very short drive from where I live (part-time of course).

I originally had a spot reserved under the big white tent but decided to sit on the grass just outside it in a shady area with my lawn chair and the lunch I packed because I wasn’t sure they’d have food.  But they did have food and drinks.  And souvenirs. Most people were sitting outside the tent. It was lovely.

This live concert with arias from operas by Bizet, Delibes, Donizetti, Gounod, Mozart, Puccini, Rossini and Verdi draws thousands of people from all over Southern California every April in a celebration of great music with a professional orchestra conducted by Valery Ryvkin. In addition, a special tribute to Leonard Bernstein’s Centennial featured music from West Side Story and Candide.  It also marked the 20th Anniversary of Opera in the Park.  Oh, did I mention that it’s free?

There were food vendors from well known establishments offering delicious sandwiches, salads, platters, wine, beer, and cocktails.  You could even pre-order online from Trio restaurant.

Presenting Sponsors: The Augustine Foundation and

Using the power of philanthropy to transform lives*Newman’s Own Foundation is all about supporting people doing great things.  People whos stories inspire us.

This month there’s also Coachella, a more famous and  enormously profitable music festival with a great long lineup.  A lot of musicians whom I’m familiar with and many I’m not.  But it was actually Opera in the Park that I really wanted to go to.  Coachella maybe another time.

Have you been to either?