The mystery continues but All’s well in Roswell!

This might sound a bit “out there” but since we weren’t too far away to begin with, I really wanted to visit Roswell, N.M. if only for the experience of being in the location where supposedly an alien spacecraft crash landed in 1947 with all the controversy surrounding it.  In any case……do you ever wonder if there’s intelligent life outside of our little planet?  God knows we don’t have too much intelligence here on Earth so hopefully there is some to be found elsewhere!

So now we’re glamping (my version of camping) in our Eurovan camper in this very flat, very desolate campsite beside a bottomless lake and surprisingly enough there’s wireless (first campsite to have it so far) but there are no antennas.  Strange right?  Last night we saw a beautiful shooting star and in the middle of the night there was some commotion going on outside but we couldn’t see anything.

Here are some fascinating facts:

On the evening of  July 2nd, 1947 a bright, disc-shaped object was seen flying over Roswell, New Mexico, heading north-west. The following day widely scattered wreckage was discovered about seventy-five miles north-west of Roswell by a local ranch manager, William Brazel, together with his son and daughter.

The authorities were eventually alerted and a quantity of wreckage was recovered by Major Jesse Marcel, a staff intelligence officer of the 509th Bomb Group Intelligence Office at the Army Air Forces base at Roswell Field, together with a Counter-Intelligence Corps officer. Once the officers had returned to the Roswell base, an official press statement was released, authorized by Colonel William Blanchard, confirming that the wreckage of a flying disc had been recovered. Marcel was ordered to load the debris on a B-29 and fly it to Wright field (now Wright-Patterson AFB) at Dayton, Ohio, for examination.

The unidentified wreckage, scattered over an area three-quarters of a mile long by several hundred feet wide, consisted of various types of material, which according to Major Jesse Marcel was like nothing he had seen before or since.

On arrival at an intermediate stop at Carswell Army Air Forces Base, Fort Worth, Texas (headquarters of the Eight Air Force), General Roger Ramey took charge and ordered Marcel and others on the plane not to talk to reporters. A second press statement was issued which stated that the wreckage was nothing more than the remains of a weather balloon and it’s attached tinfoil radar target, and this was prominently displayed at the press conference. Meanwhile, the “real wreckage” arrived at Wright Field under armed guard; Marcel returned to Roswell, and Brazel was held incommunicado for nearly a week while the crash site was stripped of every scrap of debris.

A news leak via press wire from Albuquerque describing this fantastic story was interrupted and the radio station in question, and another, were warned not to continue the broadcast.

One of the most contentious aspects of the UFO enigma is the allegation that a number of flying saucers have actually crash-landed and been recovered by the military in great secrecy. Former US Air Force intelligence officer Leonard Stringfield, for example, has now collected at least forty such accounts, some of them from first-hand witnesses. One incident that now seems indisputable – in the sense that anomalous wreckage was recovered – occurred within a few days of the United Airlines sighting, and has been the subject of one of the most thoroughly documented investigations on record. The claim has been generally dismissed for lack of proof, yet the evidence is compelling.  There are even rumurs of an alien “being” having been found and kept by U.S. government. 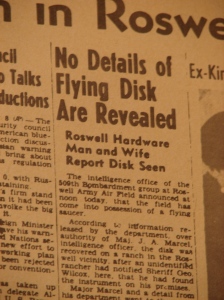 For more info. you can visit this link (one of many):