Besides the fact that I love all three – the Missoni clad stuffed bears & elephants can be found at Holt Renfrew until sold out.

Holt Renfrew says “we have always been slightly obsessed with the iconic Missoni zig zag pattern. The abstract patterns in a rich kaleidoscope of colors immediately signals the work of the Italian fashion house and we can’t seem to get enough.”

Over the holidays, Holt Renfrew partnered with Missoni to create a limited-edition, worldwide-exclusive bear and elephant. They have been designed by Missoni exclusively for Holt Renfrew in support of Orphan-Aid Africa, a non-profit organization with the goal to ensure that orphans and vulnerable children in Ghana grow up in safe and permanent family settings with appropriate care and protection.

Margherita Missoni, Chief Accessories Designer of Missoni, began working with the charity several years ago and has since become the President of Orphan Aid’s Italian division. 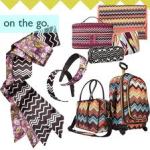 “I began volunteering with Orphan Aid Africa nine years ago, in its early days, said Missoni. “To see the changes and impact we have made to better the lives of children is incredible and rewarding. We are very pleased to have joined forces with Holt Renfrew. The funds raised will further strengthen our cause.”

Your purchase will help Holt Renfrew reach its goal of raising $100,000 for children and families through Orphan Aid Africa.  Bonus: they’re now only $25 so you can buy two.

…and Classic Design.  FABRIC THAT STANDS THE TEST OF TIME:  You can resort to wearing this even if it’s not exactly considered “RESORT” wear.

Personally the design reminds me of an old fashioned Italian style picnic.  But that is why I love my gingham lined wicker picnic basket & pieces of gingham paper lined small wicker trays for storing cheese in the fridge.   In summer I sometimes wear a head scarf on the beach with denim on one side & you guessed it….gingham on the other, conjuring up images of Annette Funicello in the movie beach blanket bingo. Don’t even remember the movie but I’m sure they had loads of fun shooting it.  Gingham is a timeless piece when it’s not overdone – or It can be too cutesy.

FYI The word “gingham” is derived from the Malay word “genggang” meaning striped. Gingham fabric first started off as a stripe pattern when it was first imported to Europe in the 17th century, but crazy folks making fabrics in Manchester England experimented with check versions.  Over time the word gingham evolved to be mostly associated with the check pattern.

In the 50s, women wore gingham dresses, but men rarely wore gingham shirts.  We know this from watching a few episodes of Mad Men.

In 1963, James Bond (Sean Connery) sported a large blue and white gingham check shirt with his swimsuit in From Russia with Love.  Casual stuff.

At some stage (guessing it was in the 70s) someone designed a tablecloth with this pattern and became very successful.  Since then gingham has been cursed with the name “table cloth pattern”.

In the 80s and 90s, bankers never took gingham seriously. Neither Patrick Bateman nor Gordon Gekko would even consider wearing it to work.

At some stage, perhaps due to marketing of Ralph Lauren, gingham dress shirts went mainstream.  Natty British socialites wore them to rugby matches.  Suburban WASPS embraced gingham as the perfect shirt to wear under their blue blazer with their white pants when they went to the country club.  Glenn Beck wore them on TV.  Frat boys wore them to class.  Now wearing a shirt or dress can be fashionable when kept simple.

Dorothy wore a blue gingham dress in the Wizard of Oz –  One of my all time favorite movies.

Research taken from “The Proper Cloth.”

What is a Henley?

My very first Henley was a waffle cotton knit bodysuit in dove grey ordered from the Victoria’s Secret Catalogue.  That started my love for this type of casual shirt.

I find this one from Garbe an impeccably constructed shirt in one of the most luxurious mercerized cottons.  It’s a take on the classic henley but with a bit of an edge with details like italian buttons and raw seams.  Comfy yet sophisticated.  Note: It is NOT a bodysuit.

Trivia: They were so named because this particular style of shirt was the traditional uniform of rowers in the English town of Henley-on-Thames.

Originally quite popular in the early 1970s, Henley shirts have recently made a fashion comeback.

In his biography of Ralph Lauren, the journalist Michael Gross quotes a New York merchant who recalled showing a vintage shirt to a Ralph Lauren buyer: “I showed this fellow underwear—a three-button long-sleeve shirt by Johnstown Knitting Mills. He said, ‘This is a new shirt.’ That’s where he got the idea for the Henley shirt.”