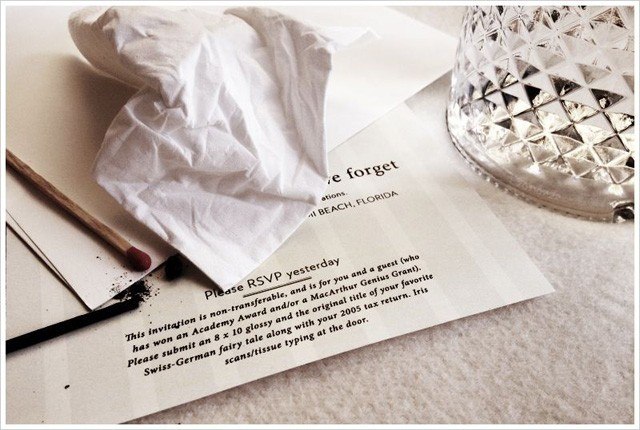 Arrangements Corporation of North America, you are cordially invited to the greatest Art Basel Miami Beach party in the history of mankind. Humanity has yet to behold such a truly magnificent party, with a gathering of luminaries, celebrities, socialites, sociables, sociopaths, bons vivants, and hangers-on, the likes of which haven’t convened since the sinking of theTitanic.

The festivities begin at the private residence of some private individual who’s probably (though privately) extremely rich, with an extremely privately private dinner. We will be celebrating some artist whose name we forget (that’s literally his name—some artist whose name we forget—all in bolded lowercase) and whose work you surely don’t know because it’s pretty obscure (literally the exhibition’s name—pretty obscure) and, in all likelihood, you probably aren’t supposed to be here. (Literally, you aren’t supposed to be here. We’re looking at you.)

This extremely private dinner, set to honor the artist some artist whose name we forget, will be celebrating the release of his new film, film, and will also honor the gallerists, curators, collectors, and Madonna (the Virgin Mary, not the pop singer) who made his book, book, such a huge success.

Many of the MacArthur Causeway’s northbound lanes have been shut down and turned into the Veuve Clicquot Art Basel Miami Beach Chevauchement e’ Glissement, a champagne Slip ’n Slide spanning the length of many football fields, ensuring that there’s absolutely no chance of escape.

All at once and quite suddenly, the heavens shall open up, wingéd cherubim shall appear carrying trumpets, which they shall blow in a spectacle of magnificent sound, in order to herald forth the culminating moment of the greatest Art Basel party in the history of all mankind, the likes of which humanity has never beheld.

That’s really too bad.  After all, I fall into the “sociable” category and I love to hang on to things. I also appreciate South Beach (the most fun part of Miami) and Art.

I promise not to miss the next one and I won’t even attempt to escape!