There is no question that foraging for anything edible is not a simple task. It’s a thing.  I mean it’s a lifestyle choice – a healthy one if you are so inclined.

To be totally self-sufficient food wise it would take a lot of work and dedication and you’d have to really know when to look for what, where to look for it and then what to do with it once you find it.  You must be adventurous, outdoorsy and know what the heck you’re doing.  Most likely you’re also a foodie. It’s not for everyone.

Our ancestors  had to hunt and gather (or forage as we like to call it) like wild animals do in order to survive.  It wasn’t a choice so much as a necessity.  Survival of the fittest.  We lucky folks don’t have to, but lately foraging has piqued my attention and interest.  Even a few of my urban neighbours are getting into it – albeit lightly.  One has chickens (so fresh eggs for sure) and another is building a terrarium to grow edible plants. I also have friends who have fresh figs, other fruits and trees with bay leaves so sometimes you’ll find me foraging around in their garden.

I really like the idea of having a garden to grow vegetables.  It’s the absolute best but since I can hardly keep fresh herbs alive for long I’ll scratch that idea.  Surprisingly enough two herbs I totally ignored all winter long have survived together in one pot – thyme and oregano.  Rosemary is pretty easy too but let’s face it – that does not a complete meal make.  Many of the plants that we know as weeds are both edible and nutritious, and some plants that grow wild have been cultivated into some of the foods we know today (for example, parsnips, garlic and carrots).

If there is one fresh fruit (that resembles a vegetable) I really miss eating – it has to be farm fresh Rose tomato.  Large, meaty & delicious.  I remember my dad eating them like apples. I don’t remember eating a good tomato since I was a teenager – too many years of eating only acceptable tomatoes at best that are usually made tastier with a generous drizzling of balsamic.  Pesticides are to blame and early picking.  We really don’t know what we’re eating.

But now I know Bill.  He’s my first foraging friend. He’s also my only foraging friend until I gather more. He refers to himself as a novice forager but from what I’ve witnessed through photos and in person it seems pretty serious to me.  At least a serious hobby. Bill’s Instagram feed is usually chock-full of some type of mushroom, berry or plant.  Also, he’s constantly making jam and lots of other interesting and/or unusual edibles.  Guess you can say he shops local.

I asked if he would mind talking a bit and educating readers about the process for this blog and send a few photos.  Because Bill makes almost everything from scratch and lots of it he finds in the forest. He doesn’t scavage around garbage bins like bears do looking for food just in case you’re one of those who think that’s how people forage.  But I know you guys are more sophisticated than that.  But to let you know how much I knew about foraging, when I first found out Bill was gathering and cooking up hedgehogs I thought it was the animal, not the mushroom.  I was about to dump him as a friend.

When I called him he was high up on a tree but he still answered the call.

Yes, I was really up at tree. I was on a 12 foot ladder borrowed from a building nearby. I was harvesting fabulous tiny cherries from the trees growing wild between the road and a parking lot about 1.5 kilometres from my home. These little black cherries are so intensely flavoured compared to cultivated ones!  I continued picking until I had about ten litres, my dog Taylor patiently waiting below. They were too small to use a cherry pitter on, so I boiled them for a few minutes, and after they were cool, put them through my hand crank food mill. I ended up with about four litres of very flavourful puree. I made a big batch of delicious jam with most of it, and then decided to try my hand at some fruit leather just using honey instead of sugar. It took about five days to dry enough, but it was worth the wait.

Me: I can hardly wait for MY jars of jam to be personally delivered!

Okay we just got a little taste of what it’s all about. Bill is a busy guy but we spoke about collaborating on more food posts with stories & photos from his adventures in foraging.  Stay tuned… 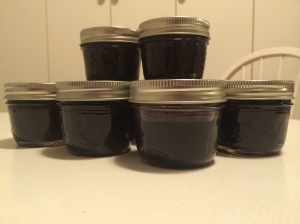