What could be better than sipping martinis in a fabulous home with a view? On a Monday no less! 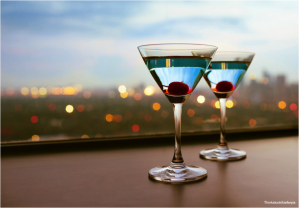 As part of Modernism Week and a love for martinis,  I’m finally going to Martinis on the Mountain.  I’ve heard about it, but every time I’m here it’s always sold out.

Tonight I’m prepared to step back in time at the historic O’Donnell House nestled high above Palm Springs with magnificent views of the valley below.  Looking forward to live entertainment featuring the sounds of Frank Sinatra and the Rat Pack, fab hors d’oeuvres and who knows what else.

The evening is also a fundraiser to benefit the Meals On Wheels Program and other programs and services of the Mizell Senior Center.

A bit of architectural history:

The house was built in 1925 for oil tycool Thomas O’Donnell and his wife.  The home originally known as Ojo del Desierto (Eye of the Desert) was designed by architect and artist William Charles Tanner. The 4,200 square foot Mediterranean Revival-Monterey style home features four bedrooms and six fireplaces. In 2000, The O’Donnell House was acquired by its present owners who began its restoration to its former glory. The City of Palm Springs recognized it as a Historic Site in 1986 and in 2000, and in 2011 it was added to the National Register of Historic Places.

Everyone agrees that my husband Don made the best martinis.  He specialized in the dirty kind.  Into a chilled martini glass he strained high quality vodka, a splash of vermouth (optional), a bit of olive juice (brine) from the largest olives available which gave it a bit of a cloudy appearance and lastly, three olives on a toothpick.  And my limit was always two.

It’s a Mod Mod World.  I went to the Modernism Preview Party at the Convention Centre the other night.  With a glass of wine in hand, amidst a collection of mid-century modern furnishings, art, jewelery and such,  there was the crowd. I was too enthralled to even take photos.  You’ll just have to use your imagination….but I’m not sure you can even imagine the getups many were wearing.  And I’m referring to mostly the men.

I’m curious…what kind of martinis do you favor?

One thought on “Monday Mood: Martinis on the Mountain”