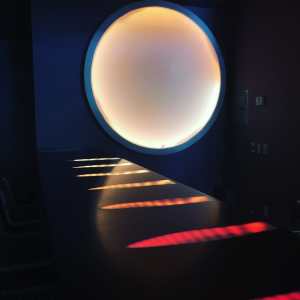 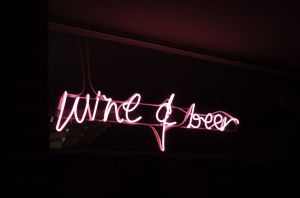 is the name of a little local speakeasy I’ve walked by a million times but only during the day.  In the daytime from the outside you can’t tell exactly what it is unless you already know, and of course it was never open.

There is only one giveaway – a neon sign that says wine & beer.  I thought it was a discreet little hole in the wall after hours store that sells wine and beer.  In some sense that’s correct, but it’s a very cool hole in the wall.

Last night after dinner I decided to walk my dogs by there and for once and for all let go the mystery. And I’m glad I did.  Inside it’s very dark but the lighting is jazzy and there are little heart shaped keychains that light up so you can read the menu which by the way is surprisingly well curated.  Every second Friday Freddy from Broadstreet Oyster (in Los Angeles) has a pop-up with fresh shucked oysters & lobster rolls that rival the best one I had once in Kennebunkport, Maine.   Other Fridays they have live jazz.  It’s a comfy local hangout where you can easily talk to strangers.  And I can sit outside with my two. 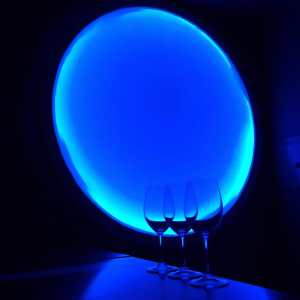 The rest is taken from visitpalmsprings.com

Okay. Anyone who names a bar “Dead or Alive;” – and doesn’t put up any signage, so you don’t know where it is until you meet someone who’s been there – has to have a good reason, right?

It’s all for the love of wine, says Dead or Alive owner Christine Soto. As a Level 1 Sommelier, she’s on a mission to educate everyone about wine – and her choice of her wine bar name, and the lack of signage, is all part of her plan. “A name is not important. My bar is all about the experience; to give people the opportunity to make a discovery. I like to make it a surprise,” she told me, as she filled my glass with her “from the tank” house Chardonnay inside her cozy establishment.

FYI: I really liked the Tank House Chard from France.  And I like surprises….which only goes to mean I’ll be back!