In the mood for glamour gowns and 70’s nostalgic decadence?  If so, you must watch “Halston” a new 5-part limited series on Netflix.

“You are as good as the people you dress. Beautiful people attract attention; they are your best advertisement,” he fabulously said.

Famed for his craftsmanship and hedonistic lifestyle, Halston was often described as the man who changed the landscape of American fashion forever, whose circle of “Halsonettes”, as they were called, included 1960s It girls like Anjelica Huston, Bianca Jagger, Elsa Peretti and Liza Minelli.  The latter remaining his friend until the very end. 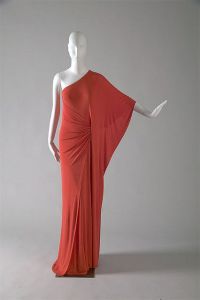 Unfortunately, with the glitz and glamour that came with the job, Halston began to sink into a world of partying and drugs. He surrounded himself with prominent New York figures such as artists Andy Warhol and Truman Capote, who introduced him to the city’s wild night life. As the sexual revolution of the 1970s approached, Halston slowly became a staple of infamous nightclub Studio 54, where he partied till the wee hours of the morning, surrounded by his “Halstonettes.”

However the ongoing party life would later lead to his demise. The iconic designer passed away in 1990, at the age of 57 from lung cancer and complications from Aids.

“He became more interested in what he was putting in his body than what he was doing with it,” said Anjelica Huston in a Vogue UK profile about Halston from 2011.

Despite being a cautionary tale, Halston’s contributions to the world of design and the business of fashion are really quite remarkable feats.

For John F. Kennedy’s 1961 inauguration, Jackie wore a pillbox hat designed by Halston.  As it turns out, the look was somewhat accidental. According to Halston, Jackie actually dented his original design. “Funny thing about that pillbox hat,” Halston said during a 1966 interview, per Vogue. “It was made too small for her . . . but Mrs. Kennedy wore it anyway. When a gust of wind threatened to topple it from her head, she dented it hanging on to the hat. The Seventh Avenue copycat hat makers reproduced the design by the thousands so accurately that each pillbox had a dent in it.” How about that!

Actor Ewan McGregor does a remarkable job portraying the designer in the series.

A little Glitz and Glamour goes a long way these days.