Jack, staring out his living room window is thinking one of three things:  Where did my humans disappear to?  What will I eat for dinner? Are there really rabbits, squirrels and mice at the end of the rainbow ? (as told to him by his mother as a young pup).

All of us under its spell, we know that it’s probably magic

I’m a big kid at heart.  I love this song performed by John Legend, Kermit the Frog, Miss Piggy (another style icon), and Queen Latifah.  It is definitely Feel-Good.

On another Feel-good note:  The many faces of Carol Burnett. 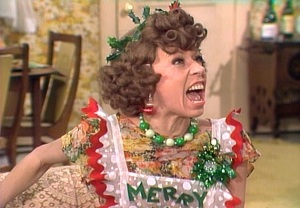 I’m so glad we had this time together.  Fond memories of simpler times and fun clean comedy.

Tomorrow I’m really excited to see Carol Burnett at the Queen Elizabeth Theatre, Vancouver.  I have no idea what she’s going to do but that’s okay, she can just stand there for all I care.  I loved watching her Acceptance Speech for a well deserved Life Time Achievement at SAG Awards 2016.  If you haven’t seen it and you’re a fan you should google it.

I vividly remember watching the Carol Burnett show with my family and grandparents. I had the pleasure of meeting Harvey Korman when I was called to work on another popular TV series while living in Tokyo.  He was a regular on Carol Burnett and as suspected he was extremely pleasant.  When doing their live TV skits the cast tried hard not to make each other laugh but always ended up cracking each other up. They didn’t care so much about being overly slick. Show is SOLD OUT!

Photo of Bangkok Jack: by Took