The word “Amite” is an old fashioned word going back to Medieval times,

Meaning friendship and balance in life.

Here we sampled a few whites with names like “Chanson d’amour” which alone was enough to make us want to buy a bottle or two.  Followed by a  single red varietal Petit Verdot and a few blends with charming names like “Compass” and “Hidden Corner.”

We were tipped off to make sure to order the charcuterie cone (yes; it’s a cone, not a board.) And it was Fab!

This hand-crafted family estate vineyard makes small quantity wines with character and taste that are true to each grape varietal and honor the history of the wine and the winemakers’ special touch.

The vineyard is well over two decades old, yet each wine is carefully crafted to the tastes of modern life. The wines are enjoyable and easy drinking.  With $15 tasting fee you get a crystal Riedel wine glass – lightly inscribed with their name on the glass.  Very classy.

We no sooner pulled up to this boutique style winery when we were eagerly greeted by a very friendly golden retriever.  A nice start to another favorful and flavourful tasting.

The 10 acre property located adjacent to the first green of the Fairview Mountain Golf Course was purchased by Bill Eggert in 1989.  After development of the water system the vineyard was started in 1993.

I can’t remember what Margeaux bought but I ended up with a bottle called Bucket O’ Blood – a white wine it is not.  It wasn’t open for tasting however a table of six ordered a full bottle and raved about how good it was.  They said every time they go to the winery they order the same bottle. Sold!

We skipped straight to the Second Chapter.  This is certainly a unique winery that produces no more than 4,000 cases featuring truly local wines inside a funky building made out of two 40 x 8 sea cans. 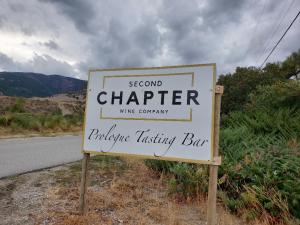 Apparently it’s a trend. Guess you can refer to it as a cannery. I’ll blog more on the home can craze separately because I was fascinated by them and have been checking out some amazing examples – you wouldn’t even know what they were…if you didn’t already know what they are.  But getting back to wine… 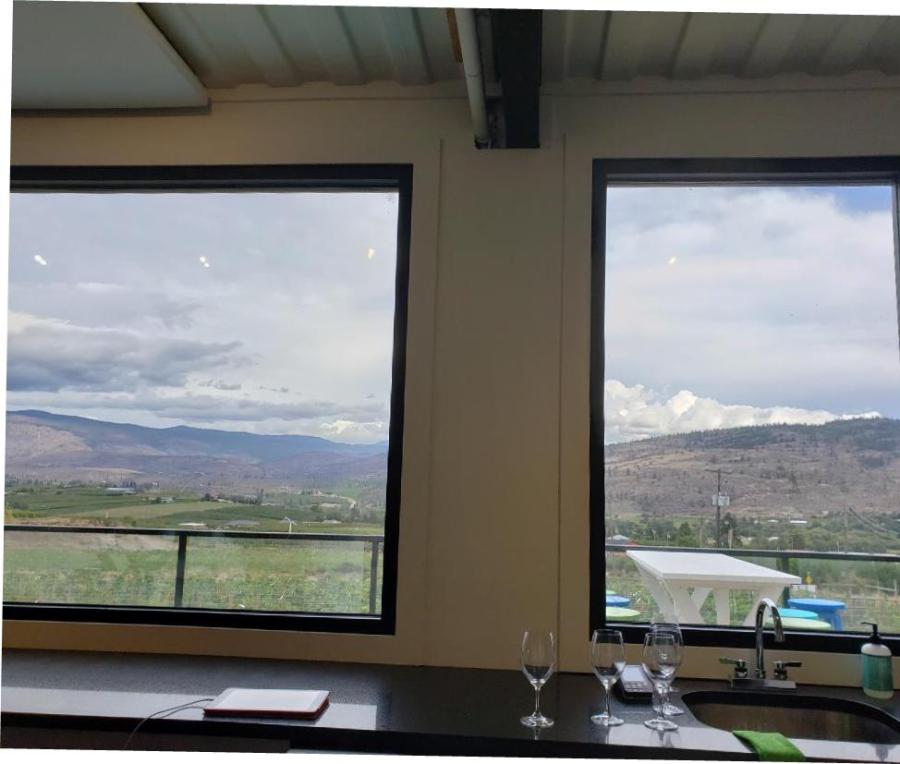 Our firecracker pourer Dianne Gibson @diannegibsongirl entertained us with stories and she happens to also design amazing corsets and costumes.  She was a riot. The wine was good but it would have been a totally different experience had she not been there.  Let’s just say she made it better.  I would go back just to see her again.  Ok; let’s not forget who I am – to also drink wine.

River Stone is a small, family owned and operated winery located on a small knoll in the middle of the valley, just south of the well-recognized McIntyre Bluff and just north of Oliver.

The day we arrived they were in the middle of a private tasting on their gorgeous outdoor garden setting.

I saved the best for last; literally.

See the idyllic farmhouse in the distance?  That’s the winery. It may be yellow in color (even though in this photo it looks to be white) but the entire site is truly ‘green’. You won’t see any wires running to their buildings because they’re 100% off the grid!

The place wasn’t even open when we arrived on the drive out.  They were in the midst of getting set up and their computer was down so we went for a walk for half an hour then came back to be first in line. Margeaux already left for her drive back to Castlegar so I did a mid morning round on my own. Don’t worry; my boyfriend was the designated driver.

Let me be clear that as a rule I never drink wine before noon.  Normally not even before 5:00 pm.  5:01 is when I start.  What a surprise.  Fabulous wines.  I bought one of each and called Margeaux to tell her she missed a good tasting. Margeaux; having FOMO (fear of missing out – I didn’t even know what the letters meant until just recently so don’t feel bad), ended up ordering a case with the four bottles I sampled.