Because if you live toxic free you will feel better naturally.

I was thinking about starting a series about women who inspire me and who better to start off with than Suzanne Somers. 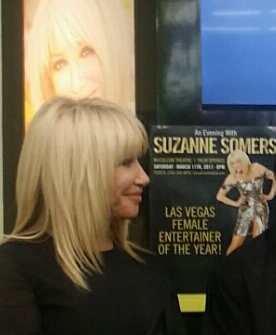 Suzanne said people magazine once described her as the dumbest woman in America.  Which means she did a great job of playing the blond bombshell bimbo Chrissy Snow in the long running sitcom(edy) “Three’s Company.”

But she had the last laugh because the idiot who wrote that didn’t realize her full potential.  A cancer survivor, she is a well respected health and wellness advocate, a *best selling author having written 25 books (her latest is called Tox-Sick – From Toxic to Not Sick), singer, dancer, Vegas nightclub performer (who was once named Female Entertainer of the Year, the same year Frank Sinatra was named Male Entertainer of the Year, ) and savvy business woman with her suzanne organics skincare & cosmetics line.  It’s a pretty impressive resume.  There’s so much to her, but for now we’ll focus on her pure organic skincare line because I was waiting for something beauty-wise to inspire me for a beauty post – this is it!  And it’s never just about looking good (although we love that); it’s about feeling good from the inside out.  Which by the way, always makes one look better on the outside.

“It’s as if we are all on a big, chemical drunk, and the hangover is a killer.” – Suzanne Somers, in TOX-SICK 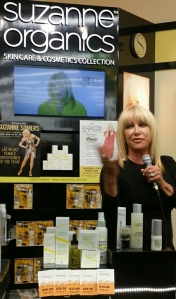 So I was thrilled to meet her alongside her handsome hubby Alan Hamel (I do remember well his successful TV talk show in Canada) when she launched her Radiance Facial Kit at Clark’s Nutrition – a fantastic family run natural foods market in Rancho Mirage.  Wait; it’s not just the facial kit she has – it’s a complete line of body care, skincare, sunless tanning, haircare and now cosmetics.  It’s a great line because it’s more than natural and organic…it’s certified ToxicFree.  What that means is a lot of NO’s!  No Pegs, Parabens, chemical emulsifiers, artificial colors, fragrance and of course NO animal testing.  She doesn’t kid around.  She walks/eats/looks the talk!  She even grows her own food.  It’s exhausting to even think about. She really does live toxic-free.  She discussed this along with her belief about a new way to age.  On close inspection I decided if she uses her own stuff (which she completely does) and looks that good I better buy me some.

As you may know I make my own little line of pure products so I’m very picky about what I choose to put on my face + body but I went for the coco mango body butter (a friend of mine swears by it – “it f….ing works!” Also the ageless serum (because it’s loaded with sea algae extract and African Birch) and a lipstick in caramelized peach (because it sounded yummy & looked pretty).  Just so you know.  All made in California.

Suzanne says she’s always loved the idea of pure organic skincare but had never experienced any anti-aging benefits so would end up reverting back to chemically-based products.  Now she has the best of both worlds.  She works closely with the formulators to use the power of nature to find the most effective anti-aging actives for clean, beautiful products to feed, nurture and hydrate precious skin.  It is like superfood for your skin.

I never even told her that I met her “Three’s Company” co-star John Ritter in Tokyo years ago on a TV series and how nicely he treated me.  But maybe she knows that now.

*On one of her many books about health and nutrition “Breakthrough: Eight Steps to Wellness,”: She scored a big coup with “Sex and the City 2.” Her book is heavily featured in the movie.  Kim Cattrall‘s Samantha–who announces that she’s “fifty-f-ing-two” and going through menopause–declares that she lives by it. She hands it to everyone in the movie. By the end of the movie, women are exchanging copies of “Breakthrough,” with the cover very prominent. A book publisher’s dream.

And if all that isn’t enough, she’s nice too!  An inspiration to all women!